The Pickety Witch — Year One. 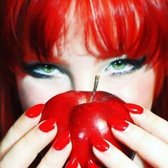 Holy shit y'all, it's been a year. And not, like, "holy shit this year has sucked." I mean it's been